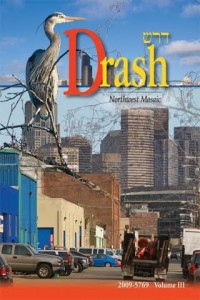 In the latest issue of Drash, Pam Grossman’s poem “Kaddish” – a Hebrew prayer for the dead – is offered to a tree. It begins: “Our tree is dying / hunks of splintered bark peel away / branches creak ominously / then litter the yard with brittle bones // The tree surgeon arrives, surveys the damage / proffers a prognosis / two years at most.”

It reminded me of trees I have known, and the willingness of some people to care for them rather than just tear them down when they are ill or diseased. It also brought to mind the chestnut tree at the Anne Frank house in Amsterdam, that years ago was very ill and many feared would need to be removed. The tree had been mentioned numerous times in Anne’s diary – being one of the few images of nature she could see during the day through the uncovered attic window. The tree was not only saved and remains under care, but seedlings from its chestnuts were sprouted and shared. You can read more about it on the Anne Frank Museum Amsterdam website, including an interactive monument to the Anne Frank Tree where you can “Leave a Leaf.”