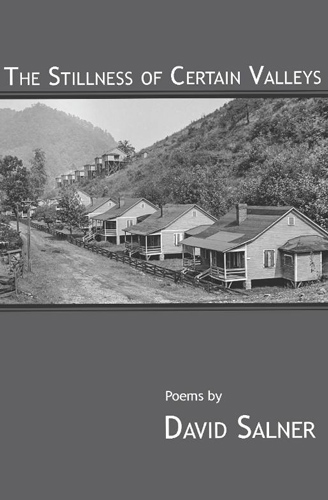 David Salner‘s The Stillness of Certain Valleys is impressively sustained. I could quote memorable lines from every poem. “Beer for Breakfast” is a pitch-perfect opening poem, and the subsequent sequence “A Dream of Quitting Time” is very strong.  Then comes the agonizing “Goodbye to My Big Toe.” Salner writes with gritty authority about many kinds of work, including a stint as a cab driver in “Like Silver,” as well as in steel mills and coal mines. Now that world is in a state of collapse, hence “water drips from a tipple / to wild strawberries sprouting from rail beds” in the title poem. I admire the moving way he evokes the dignity of a working man in “Horse Trailer with Beans”:  “nothing / but the dirt under his nails / and who he is.” This first section concludes with the understated “Steel Lunch Pail.”

The second section begins with a boy learning to be an artist, which could be the poet himself or Winslow Homer: “He creases uniforms, / inks the hollow of a gully.  With purple shadows / he molds the blunt, half-buried stones.”  Then come a series of poems about major American figures: Whitman during the Civil War, Melville brooding on human pain, Frederick Douglass working at the dry docks in Fells Point.

The third section features poems about his grandparents and growing up, before returning to the world of work, which Salner always depicts with convincing precision. Near the end in “The Lakefront Closes at 8 PM,” the poet notices as he walks to the parking lot how the weeds have “white flowers.” It’s that impressive eye for telling detail that make the whole collection a compelling and convincing read. Salner has been there, done that. As Whitman once said, “I am the man. I was there.”

Review by William Heath
William Heath has published three books of poetry, The Walking Man, Night Moves in Ohio, and Leaving Seville; three novels, The Children Bob Moses Led, Blacksnake’s Path, and Devil Dancer; a work of history, William Wells and the Struggle for the Old Northwest; and a collection of interviews, Conversations with Robert Stone.