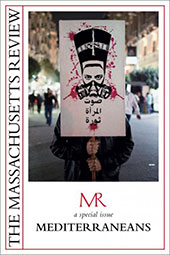 Mediterraneans is the subject of The Massachusetts Review special issue for Winter 2014. In their introduction, Editors Anna Botta and Michel Moushabeck write of history of the area, of the many cultures that crisscrossed this busy commerce route, and of the language developed to be shared among them, called lingua franca.

“Another name for this Mediterranean vernacular was sabir,” say Botta and Moushabeck, “a noun that derives from the Latin root sapere, ‘to know.’ This special issue brings into conversation the different dialects, languages, vernaculars of the Mediterranean in order to create a sabir of poetic, fictive, and artistic imagination displaying the plurality of Mediterranean identities. The texts included in the pages that follow do not pretend ‘to know’ the Med, instead they trace the filigree of a sabir which can tell us only indirectly and vaguely what Mediterranean identity is.”

The full text of the introduction can be read on the TMR website along with several works from the issue.