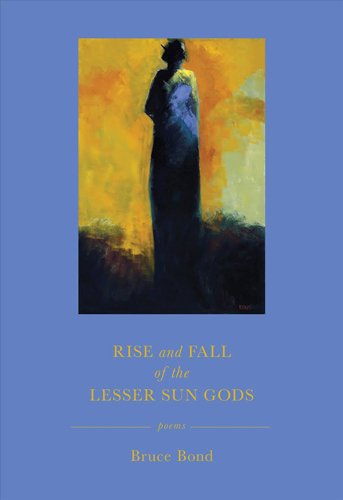 Perhaps it is because this was written in January, and in my part of the world, the temperature was hovering around 0 degrees. Maybe it is the hours I had spent hibernating and devouring hours of classic movies from the 1940s and 50s aired on TCM. Or maybe it’s simply the idea of a ‘radio in the sand’ emitting static and faint music from another place in the universe—Hollywood.

Perhaps it is because this was written in January, and in my part of the world, the temperature was hovering around 0 degrees. Maybe it is the hours I had spent hibernating and devouring hours of classic movies from the 1940s and 50s aired on TCM. Or maybe it’s simply the idea of a ‘radio in the sand’ emitting static and faint music from another place in the universe—Hollywood. Maybe all of these reasons are why I like these three lines from Bruce Bond’s “41”:

Even my town was a place far away,

like sun on your skin, a radio in the sand.
A disc of fire enlarged against the skyline.

In fact after my first read through Bruce Bond’s book, I was watching Reunion in France, a WWII movie starring Joan Crawford and John Wayne. Unlike Bond’s speaker in these poems, I’ve never been to Hollywood; though I have stalked the ghosts of these stars, and many others from their era, on the streets and sidewalks of Palm Springs, a once-upon-a-time holiday playground for the Stars.

But while Hollywood makes an appearance in Bond’s newest book, as well as Los Angeles, a “city of angels. . . buried in exhaust / at the edge of the ocean where starlets live” (“40”), its series of untitled poems (marked by numbers 1 through 64 instead) are essentially one long lyric about a multiplicity of physical, spiritual, and mythic lights. As Laura Kasischki lauds on the back cover, this is a “book length poem of spectacular beauty—incantatory, shocking, full of wild imagery and eerie juxtapositions. This is a book to be read in a sitting, cover to cover at first, in order to experience the full power of its accumulating force.”

And so I did—read it in one sitting.

That initial solar journey opened to me a universe of chemistry, astrology, gods and goddesses, Shiva, Apollo, and Christ, scientists and celebrities . . . and a little boy discovering the universe by the light of his curiosity and a telescope. Mostly, however, I encountered language as it lilted between declaratory statements and imagistic scenes. In poem “18,” for instance, Bond declares: “If the head were the lord of the body, it would never rest

But rise and fall,

as suns fall, only to crown the night
with want, loss, words that are the children of loss.

It would stare at suicide letters, heavy
in our hands, or close our eyes in prayer

to the dark of ink that brought us to it.

Bond’s declarations and scenes vacillate between lone and corporate tendencies toward power, control, and even war. In poem “35,” Evangelicals, obsessed with prophesying final days “[pour] from their buses to see the basin / where their story ends . .  .” The speaker responds to this activity with “Half of seeing / is believing.” Soliciting the attention of the whole universe, Bond examines solar angles and weights—how the real and imagined spaces beyond our knowing become playgrounds of belief, how these burden and poke, how coping overtakes our relationship with the unknown. Poem “24” reads:

Sun arcs the yard in one direction. It falls,
gods fall, and children, and our conflicts

in the childhood era. And the new child
works out his issues in violent avatars.

We learn these coping skills in childhood, claims the speaker, and they rise to the surface in adulthood, as when “Raquel Welsh / in some talk show. . . broke” when she said to the host “And if you are good, [ . . . ] I just might give you a kiss.” But:

Her host paused, failing to respond
And you could see in her face the scared

awkward beauty of a childhood need
stripped down to television silence.

Hence the care with which Bond writes the story of our godship: the myths we weave, the alchemies we engage, the relationships we breed and sever, the coping skills we adopt to hide and survive. Children pretending— needing—to be gods, or at least believe in one.

When a tower roars to pieces, the ground

the flesh together with a mother’s hand.
What a mother would not give. Dear god,

says the silence on TV in the mall.
A fire in the woods, and we its children.

Sometimes silence is the better story.
Everything is holy. Or nothing at all.

These themes are so familiar. Having grown up among Evangelicals, this book reminds me of the world I once knew in which fear of spiritual enemies and the afterlife inspired the imagination to build protective ideologies and worlds where the righteous could be kept innocent and safe.

But Bond is poking at all our protective worlds, all our coping tendencies, from religious practice to scientific inquiry to obsessive behaviors to retain youth and beauty. He considers our hopes for legacy and memorial. Our slippage into suicide and addiction. Our disappointment when armor fails us and the things we put our faith in prove to be nothing more than fantasies born of “[l]ust or dread or the kinder dispensations.”

“I carry them,” admits Bond’s speaker in the end, “To love a god is lonely.”

This book is for the reader who contemplates self and is willing to do so for at least an hour of any given day. These poems are short in syllabically tight couplet form—language and lines that roll off the tongue beautifully, making the book worth digesting just for that. But it is also a book that can be finished in less than an uninterrupted hour; though I warn you, it will take much longer to settle in the soul, and you will want to read it again.