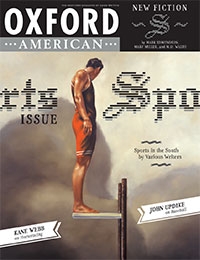 The saga of the Oxford American magazine, which has twice ceased publication after financial setbacks, added yet another episode when earlier this month the magazine’s office manager was arrested after being accused of embezzling $30,000. The woman, Renae Maxwell, may face as much as 30 years in prison; she has been released on $15,000 bail and awaits trial.

He doesn’t believe restitution is an option. “I just don’t expect Renae has any of the money left: she bought cars, got a tattoo, spent it on a ‘sweet sixteen’ party for her daughter at the best hotel in town. Who knows, she might have even used the money she stole from us to pay for bail,” he said.

Originally established in 1992 in Oxford, Miss. with the assistance of John Grisham, Oxford became a widely respected showcase for Southern writing and went on to win numerous National Magazine Awards. When Grisham ended his support it closed for a year, was bought by At Home Media Group, based in Little Rock, Ark., and revived, but was shuttered again one year later. In 2004 the magazine was again re-launched, this time as a non-profit affiliated with the University of Central Arkansas, which put up the money to keep it going. The magazine has about 19,000 paid subscribers and a print run of 35,000 copies.

The new twist has made the resilient Smirnoff even more determined and, surprisingly, optimistic. “I’m confident that this year we’ll get an infusion of cash. I don’t know why, I just am,” he said. “Soon, I know we’ll be able to pay back the money the university loaned us and begin paying our writers better.” Publisher Ray Wittenberg concurred. “This has been a set-back, but not one that we can’t overcome,” he said.

Smirnoff said that despite the lack of ready cash, the quarterly magazine will ship its April issue on time. Other forthcoming editions will cover Southern film and the magazine’s popular music issue. In the fall, the University of Arkansas Press will publish The Oxford American Book of Great Music Writing, the second anthology to emerge from the magazine.