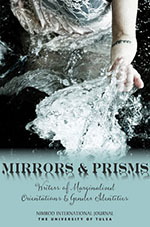 Mirrors & Prisms feature the work of writers who identify as lesbian, gay, bisexual, transgender, queer, intersex, or asexual, or anywhere under the umbrella term MOGAI (marginalized orientations, gender identities, and intersex). While Nimrod has always published the work of such authors (and indeed James Land Jones, Nimrod”s founder, was himself gay and fought for gay rights in Georgia in the 1970s as a professor of literature), we have never before devoted an entire issue to LGBTQIA writers. To do so now, we believe, is not only to continue Nimrod‘s tradition of bringing less-heard writers to the literary forefront, but to make clear what Nimrod has always known: that LGBTQIA writers have stories that can make a differences to all readers, of all sexualities and gender identities.

See the complete table of contents here with links to some works which can be read online.