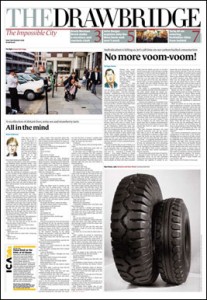 Alice Waugh, Commissioning Editor of The Drawbridge, London, wrote recently to give us the heads up that their publication will be jumping the pond to make its way to the U.S. later this year. She writes:

“The Drawbridge is an independent quarterly magazine, established in 2006 with the aim of delivering wit, thought and reflection. It takes the form of a full-colour broadsheet newspaper. It has attracted written contributions from Isabel Allende, J.G. Ballard, John Berger, Hugo Chavez, Tishani Doshi, Terry Eagleton, Eric Hobsbawm, Christopher Ondaatje, DBC Pierre, David Rieff, Slavoj Zizek and many others, including a number of emerging writers, along with a wide array of top photography and drawing from renowned image-makers including Edward Burtynsky, Paul Fryer, Robert Polidori, David Shrigley and Joel Sternfeld. Each issue has a theme. Earlier topics include Failure, Freedom, Risk, and Memory. Our next issue, on Rage is published in May.”

We’ll look forward to seeing this one hit the stands!