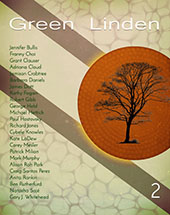 Buy a broadside; plant a tree.

I can’t imagine a more unique approach to both printing poetry to share with the world and planting trees to renew the planet. It is the creative genius of Under a Warm Green Linden, an online journal of poetry and poetics which publishes poetry (including audio recordings of poets reading their work), interviews with poets, reviews of poetry books, and poetry broadsides. Reviews and interviews are published throughout the year while the poetry journal featuring 24-30 poets is published twice a year, on summer and winter solstices.

Buy a broadside; plant a tree.

I can’t imagine a more unique approach to both printing poetry to share with the world and planting trees to renew the planet. It is the creative genius of Under a Warm Green Linden, an online journal of poetry and poetics which publishes poetry (including audio recordings of poets reading their work), interviews with poets, reviews of poetry books, and poetry broadsides. Reviews and interviews are published throughout the year while the poetry journal featuring 24-30 poets is published twice a year, on summer and winter solstices.

Under a Warm Green Linden began eight years ago, when Founding Editor Christopher Nelson was a graduate student. At that time, focusing exclusively on interviews with poets, Nelson shares, “I was very immersed in reading, and I wanted to clarify, deepen, and complicate my understanding of what I read. To my delight many poets were happy to have conversations with me. Over the years, I’ve interviewed nearly forty poets, including Kazim Ali, Carolyn Forché, Ross Gay, Kate Greenstreet, Cole Swensen, Richard Siken, Charles Simic, Ye Chun, and numerous others. Eventually I also began reviewing books of poetry; you can read recent reviews of Blossom, Ben Lerner’s collaboration with photographer Thomas Demand, Camille Rankine’s Incorrect Merciful Impulses, Natalie Scenters-Zapico’s The Verging Cities, and Jason Zuzga’s Heat Wake.”

In 2016, these efforts were expanded to include the publication of poetry and a fund to support reforestation efforts. “This year we’ve planted forty-six trees,” Nelson exclaims, in keeping with the green mission of the publication and in collaboration with The Arbor Day Foundation. It is Nelson’s hope that after another decade or so, Green Linden Press will be responsible for the regrowth of whole forests. “I should say, though,” he adds, “that we are interested in all subjects and styles of poetry. I think that because of our title and green mission, some poets assume we want to exclusively publish eco-poetry and nature poetry.” The discerning factor in all works chosen for publication: Excellence. 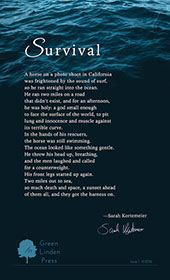 Nelson himself is author of two award-winning chapbooks, Blue House (PSA 2009) and Capital City at Midnight (BLOOM 2016) and a former fellow of the Jacob Javits Foundation and the Poetry Society of America. In addition to his formal training as a writer and editor, he also has a visual arts degree and designs the broadsides that accompany each issue. “I love the hybridity of the form—poem and visual art,” Nelson tells me, “and I love that the broadside tradition dates back half a millennium. It is a combination of ancient do-it-yourself intentions and state-of-the-art digital and printing technologies. Also, I think that the demand a poem places on our attention fits well with the presentation of visual art: something hung on a wall that one is encouraged to ponder and see again and again.”

And the unique name, Under a Warm Green Linden ? Nelson says it is an allusion to a ‘gorgeous’ Pier Paolo Pasolini poem “The Day of My Death,” in which Pasolini writes (in Lawrence Ferlinghetti and Francesca Valente’s translation):

Under a warm green linden
I’ll fall into my death’s darkness,
scattering linden and sun.
The beautiful boys
will run in that light
which I’ve just lost,
flying from school
with curls on their brows.

“Pasolini balances the inevitability of death—and its concomitant fear and sorrow—with an image of hope and renewal; yet, like many great poems, it is ambiguous: Is his final perception of the running young boys suggestive of loss and longing, or is it suggestive of some kind of continuance, resurrection even? For me it’s both; Pasolini holds two apparently contradictory possibilities in the same image, which I love.”

Under a Warm Green Linden is an open-access website for readers online, with interviews and reviews, journal issues, an index of works, and a catalog of author-signed broadsides of two or three poems from each issue. The inaugural issue included poetry from Alison Hawthorne Demming, Kate Greenstreet, Richard Jones, Timothy Liu, Kiki Petrosino, Joshua Marie Wilkinson, Ye Chun, Emma Zubrod (“with her astonishing debut publication” Nelson comments) and many others. Writers interested in submitting works can do so via Submittable with submissions read year-round.

The future for Under a Warm Green Linden looks strategically promising. Nelson explains, “The press’ growth has been quite slow, which was a deliberate decision on my part. I’ve always wanted to be stable and successful in the current enterprise before expanding it. The interview forum was originally a blog, for example; it took a few years before I even considered it a literary journal and a couple more before it became a press. I intend to continue growing the catalog of broadsides, and after several more issues, to publish a print anthology of Green Linden poets. I encourage the poets that have appeared in Green Linden to continue submitting work so that they can appear again in future issues, and readers can experience a poet’s mind as it moves through time—or as time moves through it—to experience a trajectory of thinking and feeling, and the evolution of subjects and themes.”

Readers who want to be notified of updates from Green Linden can sign up for the publisher’s newsletter here.