The Wax Paper is a literary magazine “produced in a beautiful newsprint, broadsheet format (22″ x 27.75”) that still smells like ink when you open it up,” Publisher Nicholas Freeman boasts. But readers can also find The Wax Paper online on all digital formats with tech features not available in print, balancing the best of many worlds.

Freeman, founder and director of The Finch Gallery of Chicago, brought together resources from this and Hey Rat! Press of Los Angeles to publish all forms of moving words and still images in the print edition; the website posts images, texts, audio recordings, film, and animation selections in a full archive of contributor work.

Publishing four issues per year, Freeman tells me The Wax Paper name is derived from Studs Terkel’s first radio program, The Wax Museum. “We adopted Studs as our spirit animal while we were mapping out the aesthetics of The Wax Paper. It was only natural to honor him in the name of our project. Through The Wax Paper, we are devoted to continuing Studs’ sensibilities and charisma by publishing an eclectic range of work from artists skilled in their field and empathetic in the depiction of their characters.” 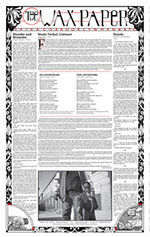 The Wax Paper Editor Hans Hetrick has writing experience from poetry to technical manuals. As Freeman tells the story, the two “became acquainted 60 feet 6 inches away from each other as the famed battery in Chicago’s Mexican Baseball League. Post-game conversation found a common interest and belief that great art must possess a generosity of spirit, a genuine respect for its audience and its subjects, and a dedication to craft. We immediately began work publishing a chapbook, Fighting Love, filled with Hans’ poems and my illustrations. After the publication of Fighting Love, Hans started trying to sell me on founding a magazine. Eventually, I relented, and The Wax Paper was born.”

Freeman and Hetrick took their first cooperative publishing experience into their work on The Wax Paper as a publication open to all forms of written word, image, and any combination of the two. “The first priority of The Wax Paper,” Freeman explains, “is to expand our understanding of the people we share the world with, and in doing so, expand our understanding of ourselves. Works will be selected on their ability to illuminate the humanity and significance of the subjects that inhabit the work.”

The Wax Paper accepts all forms of moving words and still images for their quarterly printed broadsheet. They are distributed nationally and all written work will be archived on their website. Current reading period is open until June 30th. All contributors are given a lifetime subscription.