Cutting, strange, and daring  are the words The Shore uses to describe the kind of poetry they seek to publish for its readership. Like the waters of lakes or seas or even rivers, the editors detail, “We want poems that push and ache and recede.” And like any beautiful and powerful shoreline, how could readers and writers not be drawn in?

Cutting, strange, and daring  are the words The Shore uses to describe the kind of poetry they seek to publish for its readership. Like the waters of lakes or seas or even rivers, the editors detail, “We want poems that push and ache and recede.” And like any beautiful and powerful shoreline, how could readers and writers not be drawn in?

The name, The Shore, was originally Editor Caroline Chavatel’s idea. “We all worked together on the Eastern Shore of Maryland before dispersing across the country,” the editors explain. “We agreed the idea of a shore (as a liminal space, an in-between, a place where meaning is made) was a solid concept to build a mission statement for a literary genre around.” Already with their second issue online, they tell me it is a name they have wholly grown into.

The editorial team draws from the vast experience of three co-editors and founders, Caroline Chavatel [pictured],  Emma DePanise and John A. Nieves, and one interview editor, Ellery Beck. Caroline, a PhD candidate at Georgia State University won The Laurel Review Midwest Chapbook Contest for her first chapbook, White Noises. Emma is an MFA candidate at Purdue University who recently won an AWP Intro Journal Award and the Pablo Neruda Prize in Poetry. John A. Nieves is Associate Professor and Director of Graduate Studies in English at Salisbury University. His first book, Curio, won the Elixir Press Annual Judges Prize, and Ellery Beck is an undergraduate at Salisbury University and was a winner of the Portland Review AWP Flash prize.

With so much of their own work to focus on, the editors explain their generous desire to start up a journal: “We all deeply believe in contemporary poetry and love the idea of getting poems into the world that stretch the way we understand it. We want to help share daring and finely crafted work with the literary world. We also deeply admire many literary magazines and we wanted to become a part of that important community.” [Emma DePanise pictured]

While frustrations in journal start-up can be many and multifaceted, The Shore editors take a tone of appreciation in the process, “One great joy we experienced was putting out the first issue and figuring out how to promote it. We fliered much of the AWP bookfair and personally talked to everyone we could about the magazine. It was so rewarding to see how receptive people were to our new endeavor. We are happy to say our second issue is getting even more attention than our first. It has been such a joy for our team to share this experience and learn as we go.”

For writers, the editors believe they continue to stay true to their mission as expressed in their call, and encourage new and established poets alike to submit “poems that explore the worlds of things and ideas, that recognize the liminality, the shifting of everything around us and our ability to name a thing whole.” Each issue will feature around twenty-five poets, a visual artist, and interviews based on the work of each issue.

In terms of editorial process, all three co-editors read every single submission, making notes which they discuss via weekly virtual meetings. The editors work collectively to decide what to hold onto and what to let go and to strategize the shape of the upcoming issue. The interview editor then chooses two authors per issue to interview out of the accepted work. 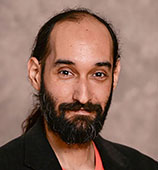 The editors have a clear intention for readers, “We want poems that try to understand the world anew. We want poems that make us have to go back to them, to read them aloud, to tell others about them.” Isn’t that the best kind of poetry? Among those who meet the criteria for the first two issues: JK Anowe, Jack B. Bedell, Ryan Clark, Charlotte Covey, Satya Dash, Alejandro Ruiz del Sol, Jordan Durham, Sneha Subramanian Kanta, Nancy Mitchell, Anand Prahlad, Nicole Rollender, Christine Spillson, Bob Sykora, Alexandra Teague, and Matthew Woodman. Chelsea Dingman and Matty Layne Glasgow are poets featured in interviews, and Maggie Delaney and Katie Chavatel have been featured artists. [John A. Nieves pictured]

Heading into the second half of their first year, the editors comment, “We hope to keep growing in readership and reputation and eventually in staff. We really enjoy working together and we would love to get as much excellent work out into the world as possible. Our goal is to deliver stunning poetry every issue and to have people able to count on us for that.”

Issues one and two are available to read online. Submissions for issue three (Autumn 2019) are open until September 1, 2019.