The Caterpillar Chronicles considers itself a “fledgling…literary and arts magazine which was born in the liminal realm between text and image.” Diana Voinea, Alexandra Magearu, Ema Dumitriu, Ana Roman, and Saiona Stoian are the publication editors, along with collaborators Mihaela Precup and Dida Dragan.

“Our magazine hopes to kindle experimental exercises in creative writing based on images,” the editors write. “Each issue will propose themes and images as starting points for texts of many forms, lengths, colours and complexions. We’re also open to various other means of artistic expression such as photographs, paintings, drawings, collages, comics, videos, mixed media, etc.” 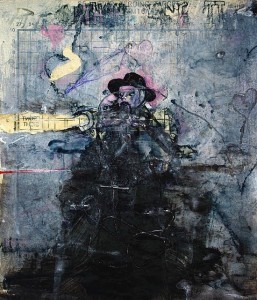 Under Calls for Submission, TCC includes:

Text and Image with an image as the starting point for texts of fiction or poetry (Andrew Abbott’s painting “Killer Quaker” pictured)
The First Line – a first line with which to begin and then continue a short story (for the next issue, the line comes from Vonnegut’s Slaughterhouse-Five)
Imaginary Letters – letters addressed to real or imaginary people, living or dead
The Art of Lying – fictional auto/biographies
Videos, Photo-Essays, Reviews, Criticism, Featured Artist and more

The Caterpillar Chronicles is currently accepting submissions of poetry, critical essays, short fiction, nonfiction, reviews, visual art, comics, lost genres and “anything else we haven’t yet thought of.”