Art is at the center of Reverberations, a digital publication of writing that “investigates the way that art echoes beyond itself and interacts with ourselves,” says Editor Linne Halpren. Editor Sage Marshall adds, “Art is often created in response to something else, and our thoughts on art are further reverberations.”

Art is at the center of Reverberations, a digital publication of writing that “investigates the way that art echoes beyond itself and interacts with ourselves,” says Editor Linne Halpren. Editor Sage Marshall adds, “Art is often created in response to something else, and our thoughts on art are further reverberations.”

Publishing on a continuous cycle, Reverberations features “Reviews,” which are written responses to current works of art (could be anything from a television episode to a museum exhibit); “Essay,” writings in a variety of genres (personal essay, poetry, visual art, etc ) that respond to multiple works of art within a piece and also respond to older works of art. “Both Reviews and Essays are created as responses to art,” Halpren and Marshall comment, “and should engage with the artwork from a personal perspective instead of focusing on qualitative judgments.” And new to Reverberations is “Dialogues,” written excerpts of casual conversations between young people and other artists.

While Reverberations is open to submissions from writers and welcome readers of all ages, they’d really like to engage the traditional college-aged writer, which comes from their own background interests and influences. 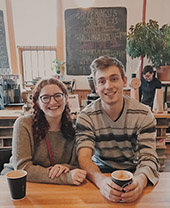 “I’m an English and American Studies double major at Wesleyan University,” Halpern explains. “I’m from Cleveland, Ohio and my work has been published on Covetuer.com, Manrepeller.com, and Method Magazine. I’m incredibly interested in fashion journalism and the ways in which clothing informs our identities and our understanding of others. My American Studies background has taught me to see the world through an intersectional lens and I’m excited by the prospect of creating a space for young people that seeks to open up the oftentimes elite world of art, criticism, and digital publishing.”

Marshall tells NewPages, “I’m an English major at Wesleyan University. I’m from Telluride, Colorado and my writing has been published in Mountain Magazine, TheNation.com among other publications. Although I’m mainly interested in writing, I’m fascinated by other art forms and the way that form interacts with content. I’m excited to read and publish essays about works of art that are written from the distinct perspectives of other young people.”

Both Halpren and Marshall were interested in the voice of the youth that they felt was not being heard in relation to art. “Before starting Reverberations,” Marshall says, “I was frustrated by the lack of publications that focus on peoples’ personal responses to art. Many publications focus on reviews that judge artwork through a critical lens. I’m more interested in looking at the way that people engage with art on a personal level because art is inherently a subjective experience. Furthermore, I wanted to focus on the experiences of younger people who are in the process of investigating their own identities.”

Halpren adds, “Also, I think that we’re in a moment right now, especially with the current political climate, where self-expression and creating spaces for young people’s creativity feels more imperative than ever. As a young person, finding digital platforms that are accessible to submit to can be very difficult. We hope to fill that gap and inspire young people to engage with more art and create thoughtful responses.”

Readers coming to Reverberations can expect to find an array of pieces that all contain distinct responses to many different forms of artwork, “engaging, personal, and emotional content that utilizes emotional, analytical, and intuitive responses, instead of judgment, towards art.” Marshall gave the example of Shelby Eslbree, a student at Columbia University and retired professional ballerina, who wrote an essay about a documentary film called Wendy Whalen: Restless Creature. “Eslbree wrote about the difficult transition between dance and life afterwards. I like her piece so much because it gave specific information about Shelby’s experience of transition to life after dance at the same time that it engaged universal concerns of shifting identities.”

Contributors to the publication can expect that their submissions will go through at least one round of revision where suggestions for improvement are returned to the writer. If a submission is not accepted, the editors try their best to give feedback on reasons for the decision.

In the future, Marshall says they hope to expand their reach and increase the number of pieces that they publish. “Furthermore, we wish to cultivate a base of writers that contribute for us regularly. We are especially interested in publishing work by people from traditionally underrepresented backgrounds and identities. Art should be inclusive and available to everyone, and we want to support this philosophy with the high-quality work that we publish.”

Halpren agrees on the increase in amount while expanding the variety and sustaining quality content, “I’d really love to see some creative responses in terms of medium for our essay section. I’d be intrigued to see a poetic response to a television show or a visual art response to a concert experience, etc. And I would love to see a diverse range of young people from varying backgrounds, hometowns, and educational experiences to contribute.”

Submissions are accepted on a rolling basis by email for all three categories: Reviews, Essays, and Dialogues, and the publication is open and free to read online here.