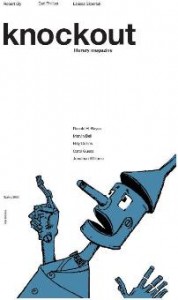 “Knockout is here, and the first issue features some of the finest writers working today. Half of the proceeds from sales of issue one will go to the Valentino Achak Deng Foundation, an organizaiton established to help those affected by the civil war in Sudan, and a portion of the proceeds from teh sale of future issues will go to other charitable causes.

“Knockout is considering poems for #2 & #3. Translations are welcome, as long as you have permission of the author (as long as they are still kicking), and we’re particularly interested in translations in German, Chinese, the Nordic Languages, and translations from the Middle East.”