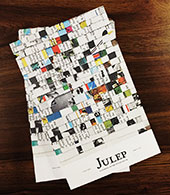 Based out of Nashville, Tennessee, Julep Journal has just issued its third print volume to complete its first year of publication. Named, as you might well have guessed, after the delightful southern cocktail, the editors comment, “We identify with it. It’s Southern by origin and in spirit. It’s refreshing, clean. It’s simple but has innumerable variations.”

In keeping with that refreshing spirit of variation, Julep publishes all genres – fiction, poetry, creative essays, academic treatises – and, according to the editors, “we especially love pieces that exist between or beyond those boundaries. In other words, if it doesn’t fit in with more rigid, binary journals, there is a home in Julep.”

Giving this new writing a home are founding editors Joseph Storey, Kevin Foster and Greg Frank, and editors Brittney McKenna and Theron Spiegl, who “like good Southerners, believe in the power and beauty of a fine physical object.”

When asked the motivation for starting up a literary magazine, the editors go back: “Years ago, we would sit around coffee shops and complain about the state of cultural journals. So many do little more than spin the wheels of their chosen genre, advance a binary political position with an inherently limited type of nuance, or represent only a corner of a region. We dreamt of a journal that advances art, represents the spectrum of the creative work of a region, and pushes beyond political binaries. The narrative of the Southern Renaissance, Nashville and the surplus of its creative economy, was rolling at the time. So we decided to start a journal as a platform for the work that was happening.”

As such, readers of Julep can expect to find anything and everything that fundamentally excellent writing and visual art. “A distinctly Southern, non-binary artistic and cultural perspective,” the editors promise readers. “The best work of upcoming Southern intellectuals and artists.” The most recent issue features works by Eileen Fickes, Stephen Mage, Daniel Pujol, Cameron Smith, Matthew Truslow, Jessica Kennedy, and featured artist Robert Scobey.

While publishing as a triannual the first year, the editors are planning to extend the length and cultural commitment of each journal and move to biannual printing. “We want every issue to eclipse the last in cohesiveness of theme, quality of work, and physical beauty. In order to accomplish this, we’re planning to publish twice yearly rather than thrice, with a greater range of art. We also want to build and grow our partnerships with artistic and cultural institutions across the South, including cohosting events of all types. Why create if it’s not ambitious?”

For writers, the editors are always accepting new pieces. The next issue will be available in mid-June, with plans to select pieces for Issue Five by the end of July. Visit the Julep website for more specific information about genres.

The most unique quality of Julep’s model is editorial. We reject the notion that ideas – and the attempts of writers and artists to express those ideas – exist in a vacuum. Julep’s team of editors support writers as they hone – and even sometimes create – their pieces. It’s a messier process, but the pieces turn out better and the final product is more thematically cohesive.