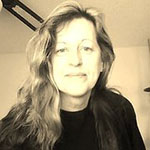 Eastern Iowa Review is a new annual print publication, providing select essays online for readers to sample. Founding Editor Chila Woychik [pictured] embarked on this venture with six years’ editorial management experience from Port Yonder Press as well as expertise publishing other literary magazines over the past several years. Assistant Editor Beverly Nault and other staff with Eastern Iowa Review bring both academic and professional experience, creating an eclectic team that provides plenty of input from which Eastern Iowa Review will take its direction.

With all her experience, Woychik not only knew what she was getting into with a literary magazine start-up, but sought it at this point in her career. “Book publishing is a lot of work,” she told NewPages. “I loved what I did at Port Yonder for those six years, loved every minute of it, but it became too much. Once I discovered the literary journal market and began to see my own writing being acquired, I felt it was time to move from small press book publishing to journal publishing. It’s been a great change for me; I’m enjoying it immensely.”

The first issue of Eastern Iowa Review actually had a predecessor, Woychik explained, “We actually did a pre-issue we called the Bonté Review (French for ‘goodness’) but found the name didn’t quite portray the sense of place I felt it needed. I’ve lived in the eastern part of Iowa for twelve years now and am enamored with this state, its people, and its topography, especially the rolling hills, trees, and wildlife in this area. I found it to be a fitting name, and though similar to another well-known publication in the state, I feel our focus is different and therefore have no need to compete with or be compared to another. Besides, Iowa is such a fantastic literary venue in itself that it deserves more than one or two journals.”

The (true) inaugural issue of Eastern Iowa Review includes creative nonfiction, literary fiction, and art, while the second issue, Woychik hopes, will be narrowed down “to the thing I love reading and writing the most: Annie Dillardesque lyric essays and Gertrude Steinesque / Anne Carsonesque experimental essays.” The Review isn’t ruling out the hybrid essay at this time, “though terms overlap so much that we’re actually receiving a good number of generic creative nonfiction essays, a few of which we’ve accepted because they were good, though not necessarily containing the lyricism we’re seeking,” said Woychik. “What we’re after is the song, the lyricism, and the uniqueness, the experimental. There are plenty of outlets for general creative nonfiction but I want to wean us off that, if we can find enough of what we’re seeking.”

For their first issue, Eastern Iowa Review was fortunate enough to snag Fulbright Scholar, Pew Fellow, Kingsley Tufts and Pushcart winner Afaa Michael Weaver to contribute an autobiographical piece on craft, and Stephanie Dickinson contributed three short literary fiction works. “As far as I’m concerned,” Woychik said, “Stephanie is one of America’s most brilliant writers; everything she pens is linguistically beautiful, achingly so, even given the tough topics she often broaches.” Although the publication is new new, Woychik hopes that within the next few years they can attract both top-notch and beginning writers. “I would love to see Eastern Iowa Review be the breakout journal for a few soon-to-be nationally well-known authors,” keeping with their overall desire to “attract great writing, lyrical writing, experimental writing, from whomever, and see entire families enjoy it from front to back.”

Writers who submit works can expect that they will be treated to a thorough review process. Submissions are sent through Submittable, then Woychik assigns each piece to one reader/editor or possible more, even up to all four readers/editors. They record their recommendations, Woychik reads those, reads the work itself, and makes the final decision.

It’s a process that will provide readers with “the strongest, highest level, prose” the editors can find in the lyric and experimental realms. Woychik added, “I also have a special interest in seeing young people, beginning in middle grade or so, discover a love of the literary world, something beyond ‘simple’ reading. I’m not sure why we often wait until a person gets into university to introduce them to the world of literary writing. I would like to see young folks catch the rhythm of fine literary writing, the lyricism inherent in good writing, long before they reach college. So we have a ‘wide audience’ requirement, that is, we would like the material, literary and high level as it is, to also be fitting for most all ages.” Beginning with the second issue, Eastern Iowa Review will be able to offer accepted contributors a complimentary copy of the issue plus a small stipend, and also enter their work into the Eastern Iowa Review Essay Award pool, an annual award for the most outstanding lyric and/or experimental essay accepted.