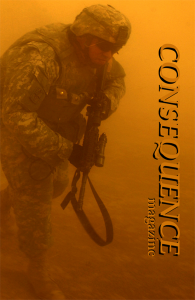 Consequence is a new literary magazine published annually, focusing on the culture of war in America in the 21st century.

Editor George Kovach has this to say about the publication, its purpose, and the philosophy behind it: “We believe that literature and art can advance the discourse a democracy needs to govern itself… Our subject is war and how it affects us at every level of society. In our culture, for well over two and a half millennia, war has compelled artistic expression ranging from personal catharsis to historical record, across a wide spectrum: actual combat, political agendas, moral decisions, the need to mourn, the pain of witnessing, the desire for peace. Art that addresses the consequences of war wants to make us see what we’d rather turn away from… Be prepared to question the way you think and feel about war.” Read more from Kovach’s introduction on the Consequence website.