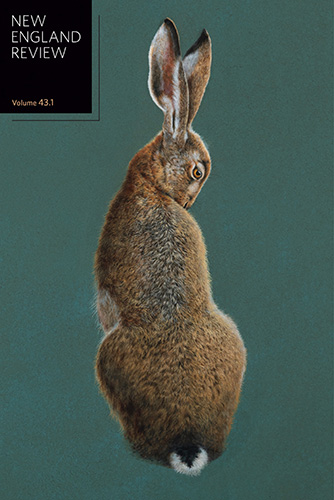 New England Review Editor Carolyn Kuebler writes in the 38.3 Editor’s Note that, while the twenty-three pieces in issue 38.3 (2017) were not chosen for nor do they have a focused message or singular theme, “. . . it surprised me to see how frequently the shadow of war—to take one obvious example of a culture of violence—darkened the edges of these disparate writings. With the world always in the throes of some violence or other, it’s no wonder; whether we’re civilians or soldiers or doctors, we all become part of it. Born during the Vietnam War, finishing college at the start of the Gulf War, and then becoming a parent during the War on Terror, I’ve learned that being in a state of war doesn’t always have a clear beginning and end, and now it’s not even always clear where the war is actually happening and who’s fighting it. It’s not just in this magazine or in this moment in time that writers are contending with such themes; it’s always.”

Read the full editorial here and access full-text of several works from this issue, including Louise Aronson’s “Necessary Violence.”