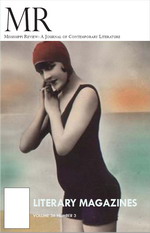 The newest issue of Mississippi Review is a stunner for those of us who love our literary magazines, and a must have, must keep issue for its importance of historical literary record. No need to wait until later to say how integral this issue is; it’s clear from the moment you hold it in your hands. The issue is themed “Literary Magazines” and includes four parts:

Part Two: The Editors Introduce
“MR asked the editors contributing to this issue to introduce a writer they have published that they found particularly exciting, working in new and interesting ways, or otherwise deserving of more attention.” In this, you’ll find works by Claire Bateman, John Brandon, Daniel Grandbois, Rene Houtrides, John Leary, Maureen McCoy, B. R. Smith, and Catherine Zeidler.

Part Four: Lit Mag Miscellany
Includes quotes about lit mags, a perspective and history on the contributor bio, and notes on the history of lit mags.

All I can say is I can’t remember when I was ever disappointed about an upcoming holiday because I felt as though spending time with family would take away from my reading time. . . but it is a long car ride north, so I might just be able to fit it all in.