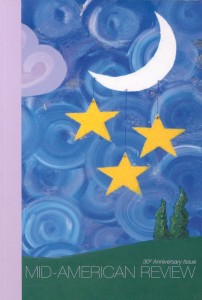 The latest double issue of Mid-American Review (v30 – 1&2) celebrates the 30th anniversary of the publication with and Featured Poet Tony Trigilio. Included within the whopping 400+ pages are winners and select finalists of the following contests:

Also included in this issue are the 2009 AWP Intro Journals Awards – Kayla Skarbakka and David Lumpkin.