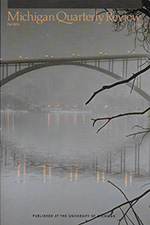 Like many who respond to this man-made disaster, Freedman points the blame directly as it should be: “The real impurity, then, extends from the polluted water to the polluted political system that allowed emergency managers to run cities without being answerable to them, to the cover-their-ass bureaucracy, to the governor who reverses Harry Truman’s credo by whining that the buck stops everywhere but his desk. The real impurity is the stupidity, selfishness and racism that is structural to the politcal system in this and far too many states.”

Included in the issue is “Flint and Beyond,” a special section on the Flint water crisis: Flint native Kelsey Ronan explores the effect on her family in “Blood and Water,” Tarfia Faizullah dedicates her poem “I Told the Water” to Flint, fiction by Matthew Baker, “Pheasants of Detroit,” and Jack Driscoll, “Calcheck and Priest” look at life in Michigan today.