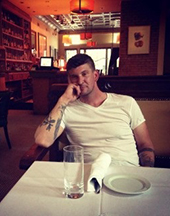 “Cadets are keen observers of social cues from their professors, retracting behind the protective formalities of rank at the first whiff of ‘agenda,’ regardless of its political stripe. It’s easy enough, and they have little social capital invested in the humanities. Nor do they know many people who do. . . . Unlike most of us, though, Cadets will flat-out ask in public how reading poems matters to future practitioners of their trade.

It’s a sincere question, a vital one. It belonged in the public sphere the first time I heard it in October 2016. . . . poetic speech can, at its thorniest, frame problems that cannot be reduced to partisan accolades, commodification, claptrap. It can render the crisp shadows of power under the thorns.

But this is work. Like most hard work, it is also humbling, if not downright humiliating.”

From “That Which is Difficult: Poetry at West Point” by Matt Salyer
Published in Plume: Online Poetry Magazine, Issue #87, November 2018