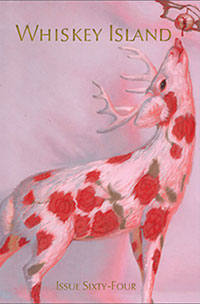 If you wonder how we pick Lit Mag Covers of the Week, it really is just looking at the issue and catching ourselves saying, “Oh, that’s a cool!” Exactly what I said when I picked up Whiskey Island issue 64. St. Paul, Minnesota painter Aniela Sobieski, also an MFA candidate at Syracuse University, has her work “Young Buck,” oil on canvas, featured on the cover. While still gorgeous, it’s not quite in full. Visit her website for the whole picture. 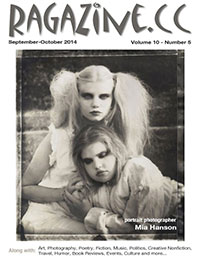 This September/October 2014 cover of Ragzine had been showing up on our slider feature, and each time, I am absolutely drawn to this image. “Ida & Disa” is a photo by Mia Hanson whose interview is included in this issue online. 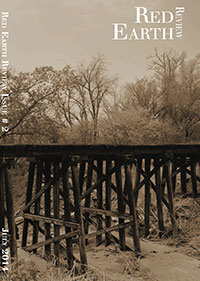 Number 2 Summer 2014 of Red Earth Review struck me because I recognize that precarious-looking train trestel trusted to hold up a ton of freight through wooded swamp. We have a few of those near where I live, in addition to reminding me of the film scene from Stand By Me. “People Get Ready” is the photograph by Wilma Whittaker. 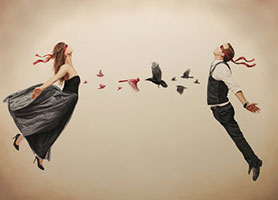 “Two Fates” oil on masonite panel by Alex Hall featured on the online literary magazine decomP is from his latest series “Relativity,” which depicts individuals floating in time and space. Hall says of this series, “I chose to paint the figures with no distinct faces so they would relate to every man and every woman.”
# lit mag covers# literary magazines
Spread the word!