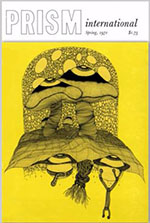 PRISM international – Canada’s oldest literary magazine with its first issue published in 1959 – has taken a huge step in preserving its history. The Prism staff initiated and funded the digitization of its entire archive of magazines. The University of British Columbia’s Digitization Centre completed the task over a four-month period, making 194 issues available online; new issues will be added when published. “The digitization of PRISM international’s archives is an important step in preserving and promoting influential literature, both Canadian and international,” says current Poetry Editor, Dominique Bernier-Cormier, “connecting different communities, and generations, of writers and readers.”

Promotions Editor Claire Matthews entices readers to dig into the past issues, “You can check our early works by writers such as recently [Governor General Literary Award] nominated Robyn Sarah whose work first appeared in PRISM 13:1 [Summer 1973] or Seamus Heaney, who published two poems in issue 12:1 [Summer 1972]. In 1996, PRISM also managed to publish a translation by Seamus Heaney of the Irish poem ‘The Yellow Bittern,’ originally written by the 17th-18th century poet Cathal Buí Mac Giolla Ghunna. In a brief interview, Sarah O’Leary, author of When You Were Small (Simply Read Books, 2008), divulges how she was able to get her hands on work while she editor of PRISM international.”