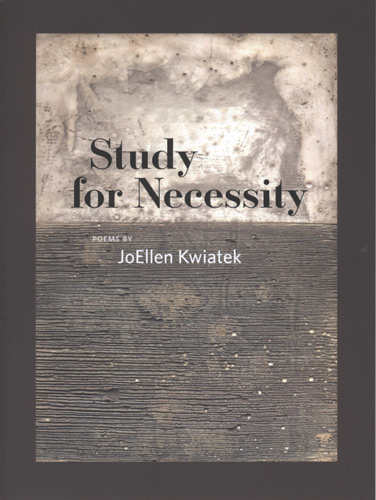 Study for Necessity by JoEllen Kwiatek was released in April 2015. Winner of the 2014 Iowa Poetry Prize from University of Iowa Press, “Kwiatek’s poems emit the uncanny luminosities of the artists’ worlds they refer to: those of Caspar David Friedrich, Albert Pinkham Ryder, Odilon Redon. Each is a ‘token of strangeness’ built with delicacy and restraint, embodying, vivifying what the poet calls the mind’s ‘lonesome flourish.’ Like entries in a recondite log, or the etchings, or tracks, of a complex consciousness, this work cannot help but identify its own material and spiritual corollaries: a bridle worn to threadbare, a voyage that ‘grows more & more captivating. More terse.’ It is, as one poem puts it, as if seeing / were a form of radiant / isolation. And yet the presence established over the course of the book is profoundly connective, rich with acute physical apprehension and charge. It moves under pressure toward its singular end, its very ‘necessity,’” says judge Emily Wilson.

Read an excerpt of Study for Necessity or pick up at copy at the University of Iowa Press website.