Throughout 2018, Basalt Magazine  “committed to publishing a selection of poems from each month of Ian Boyden’s manuscript A Forest of Names. Over the course of a year, Boyden translated the 5,196 names of schoolchildren crushed in the 2008 Sichuan Earthquake. He then began a collection of poems, each written on the day of each child’s birth. An in-depth discussion of these poems can be read in Fault Line: An Introduction to A Forest of Names.” 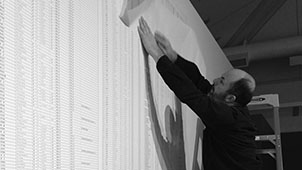 In his discussion, Boyden explains how, had it not been for Chinese artist Ai Weiwei, the names of these children, and the government being held accountable for the shoddy construction of the schools where these children were killed, would have been lost.

As part of the curation of Ai Weiwei’s work related to the earthquake, Ian Boyden papered a wall with the children’s names, “a massive work on paper consisting of 21 scrolls, together measuring 10.5′ by over 42′ long.”

Boyden then discusses his work, taking the name of each child, the Chinese characters, and translating these into poetic renderings: “Holding the hopes implicit in each of these names in tension with the tragedy of the children’s deaths has also been a translations of one grief to another: perhaps this is the most accurate translation of all.”