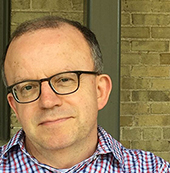 In addition to celebrating its tenth anniversay of publication, the newest issue of Canada’s Hamilton Arts & Letters (11.1) is also a celebration of Bertrand Russell and the 50th Anniversary of the Russell Archives.

Guest Editor Rick Stapleton [pictured] writes in his introduction, “In 1968 McMaster University purchased the first instalment of the archives of Bertrand Russell (1872-1970), a vast collection of letters, manuscripts, photographs, books and other personal material of one of the 20th century’s greatest philosophers, writers, and peace activists. At the time, the 96-year-old Russell was in need of funds to support his peace work, and McMaster’s university librarian, William Ready—renowned for his ‘buccaneering’ style of acquiring collections—was able to bid successfully for the archives. Now, 50 years later, we celebrate that event with this special issue of Hamilton Arts & Letters magazine, devoted to Bertrand Russell.”

Hamilton Arts & Letters is an online publication; the full issue can be accessed here.