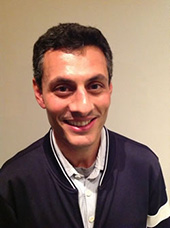 Glimmer Train March 2019 Bulletin offers an interesting selection of craft essays, each just at a tipping point of controversy.

“Words, and Barry Hannah, the Guy Who Taught Me to Love Them” by Marian Palaia shares how Hannah’s voice and vernacular influenced her early on, although now she comments, “if Barry were writing the same stuff now, I can’t imagine how he’d get away with it.”

Devin Murphy’s “We All Do It! Don’t We? The Art of Reading Like a Thief” examines the fine line of “Did I plagiarize the novel I’d read?” He comments on his own teaching and trying to help student writers “understand the value of actively reading for material that will help them deepen their own stories.”

“What interests me about politics in fiction,” writes Siamak Vossoughi [pictured], “is how it informs the lives of characters.” In his essay, ‘The Political Lives of Characters,” he asserts, “A writer only runs the risk of being preachy or dogmatic if he or she makes a character of one political belief less three-dimensional and human than that of another.”