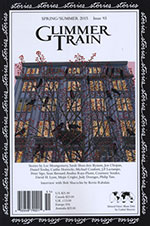 After nearly 30 years of continuous publication, Glimmer Train has announced that they will be closing shop after this next year of publication. Submissions are still being accepted to finish out with issue #106, but after that, sisters Linda Swanson-Davies and Susan Burmeister-Brown – or as we call them, The Glimmer Train Sisters – plan to retire the publication entirely.

While they have received many offers and inquiries to let others take over the renowned journal, The Sisters had already decided against this option. In a form letter response to such inquiries, The Sisters. . .

After nearly 30 years of continuous publication, Glimmer Train has announced that they will be closing shop after this next year of publication. Submissions are still being accepted to finish out with issue #106, but after that, sisters Linda Swanson-Davies (pictured left) and Susan Burmeister-Brown (pictured right) – or as we call them, The Glimmer Train Sisters – plan to retire the publication entirely.

While they have received many offers and inquiries to let others take over the renowned journal, The Sisters had already decided against this option. In a form letter response to such inquiries, The Sisters recount a story of their parents starting up a wallpaper shop back in the 1960s, and how, in an effort to encourage every homeowner – no matter their finances – to make their homes beautiful, The Sisters’ father gave free lessons on putting up wallpaper and even loaned out tools so it could be done properly. When the time came for the parents to move on from this business, they sold it to new owners who did not follow the same business ethics and turned the business inside out. So much for the reputation the family had meticulously and genuinely built up over the years.

I can understand why Susan and Linda are opting to shut down instead of handing it over. From the NewPage’s perspective, while we see a lot of turnover among editors in publications, it’s rare to see entire publications handed over to others. In some of those cases, the publication has a transition period and seems to move along quite well, but in others – often – we’ve witnessed the not-so-pleasant transitions which have resulted in damaged relationships and ultimately the demise of the publication. Unless Susan and Linda would be willing to walk away and say, “We don’t care a lick about what happens,” then shutting it down seems most logical.

I have known Glimmer Train nearly my whole reading life. It was one of the first literary magazines I can remember seeing in my hometown bookstore (now called an “indie” bookstore), and then later, in the libraries, and then in the chain bookstores that cropped up. Over the decades, Glimmer Train became ubiquitous. You couldn’t walk into a bookstore, library or coffee shop in the US that didn’t have the uniquely stylized cover somewhere on a shelf or table. And this speaks to the business sense of The Sisters. A sense that wasn’t always appreciated by others.

I liken it to Starbucks, which started out as three students living in Seattle who wanted to sell decent coffee. Everybody loved them, and they grew, and everybody loved them more, and they grew some more, and so on, until they got so big that people started to hate them, blame them for ruining small town businesses, and for becoming a behemoth corporate machine. But hey, guess what? When people love you and they keep giving you an outrageous amount of money for a cup of coffee, you can’t help but grow. I think it’s called “The American Dream,” that doing something you love could actually make you a decent living, maybe even make you rich. But then that’s when I guess we’re supposed to start hating people – for succeeding.

Glimmer Train, too, was a small start-up publication – like the (literally) dozens of start-ups we see each year. And how many of those start-ups persist after a year? Two years? Five years? At NewPages, we are continually curating our lists to keep up with the new publications, as well as those that have folded. And why is that? Because it takes a HUGE amount of energy to run a good publication. It requires dedication, commitment, time, and money, even online publications that are “free” to publish. While some editors have a great deal of motivation at their start-up, this dwindles with each passing year that the same editor has to pay to maintain the web presence, has to be the only one sometimes reading through the slush pile, has to be the only one trying to get enough submissions to publish a full issue, has to get enough QUALITY submissions that haven’t just been spammed out through some submission service to publish a DECENT full issue. And the resentments pile up.

The biggest criticism I heard about Glimmer Train over the years was that they were just a “contest machine.” And my response to that is: Yes. Yes, in part, they are, and a damn good one at that. They ran numerous contests throughout the year. They developed a consistent calendar, a submissions process, and a generous awards payout for winners. They were one of the best business models of a literary magazine I have ever seen. And this is exactly what has kept them going for three decades: They were good at it. They made money and they gave a ton of money away.

Unlike Starbucks, to my knowledge, Linda and Susan have not become multi-millionaire literary moguls. At best, I hope they made enough money to support themselves through each year and sock away some for retirement. What is so wrong about that? I think it’s genius that anyone could figure out a way to make money from publishing literature and not just make enough to scrape by or go into debt, and they did so supported by a community of readers and writers who genuinely appreciated their publication.

Glimmer Train has been an icon in the literary landscape. One of the most oft-used lines in their contributors’ bios has been, “This is so-and-so’s first publication.” Never in any other publication I have thumbed through over this past decade (and then some) have I seen this phrase to the extent that I have in Glimmer Train. Which means there are literally hundreds of writers out there who received their first publication because Gimmer Train gave them that opportunity, either through general submissions or through one of the contests.

Often, I hear this is what motivates editors to start a publication: To recognize those whose writing is overlooked. To give new writers a chance. To break away from the tradition of publishing already-famous writers or schools of writers.

That’s exactly what Glimmer Train did, and not just at its start, but year after year, and decade after decade. There is no other publication like it. None. None that have upheld this credo for so long and so abundantly.

After first hearing that Glimmer Train would cease publication, I was seriously disappointed, as I’m sure many others were and will be. But then, I thought of all The Sisters have done through the years, what a wonderfully continuous contribution they have made to our literary community, and my sorrow shifted to acceptance and then joy. What an amazing accomplishment they achieved, creating this existence, this stalwart, this rich history for us all. I’m happy for them. Happy they have come to the decision to let Glimmer Train finish out this final year with style and with grace, and then let it just be done. Like any fine story that comes to its resolve, we are all enriched for having shared in the experience of it, and even though it is over, it is a part of us. Forever.