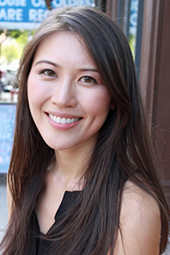 The December 2017 Glimmer Train Bulletin is a fun read this time around, with an eclectic mix of craft essay written from teachers and authors, some of whose works have recently been published in Glimmer Train Stories.

Author of the novel The Luster of Lost Things , Sophie Chen Keller’s [pictured] essay, “On Writing from a Child’s Perspective for Adults,” is a topic I have often tried to better understand as a reviewer assessing others’ writing;. This was an instructive perspective to read, as Keller asks, “But how to manage that voice while keeping the novel from becoming a book for younger readers – especially when my inspiration for plot and tone was  those books for younger readers?”

For essays on writing and revision, University of Chicago Professor Will Boast offers his advice on “Cutting Out the Bad Bits,” while Andrew Porter, Associate Professor of Creative Writing  at Trinity University in San Antonio writes on “The Long First Draft.”

And, in these volatile times, Iranian-American writer Siamak Vossoughi comments on “The Political Lives of Characters,” noting the decision writers face: “Political beliefs can matter a lot, in stories and in life, and they can not matter at all. [. . . ] A writer only runs the risk of being preachy or dogmatic if he or she makes a character of one political belief less three-dimensional and human than that of another.”

The Glimmer Train Bulletin  is free to read online each month here, or have it delivered monthly to your inbox.