In honor of Nobel month The Georgia Review is placing on sale two unique Nobel laureate issues from Spring and Winter 1995. Until 31 October, these limited-supply back issues are available as follows: Spring 1995, $20; Winter 1995, $15; both, $30.

During the planning stages for the summer 1996 Olympic Games in Atlanta and the satellite Cultural Olympiad program, Georgia Review editor Stanley W. Lindberg proposed that the living laureates of literature—they numbered sixteen at the time—should be invited to appear together in Atlanta for an unprecedented multi-day program. His proposal was embraced, and on 23–25 April 1995 eight laureates convened at the Carter Center for readings, panel discussions, press conferences, and social activities. Never before or since have so many of these distinguished prizewinners been in the same room anywhere in the world. 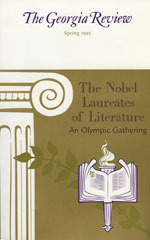 The 350-page Spring 1995 issue of The Georgia Review is entirely given over to the Nobel laureates and comprises the following:

Bibliographies, photographs, and original drawings of all the laureates, the last by Darrell Rainey. 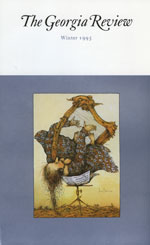 The Winter 1995 issue of The Georgia Review includes a sixty-page section of material transcribed from the Nobel laureates’ gathering:

Four pages of photographs taken during the events.