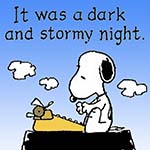 The First Line literary magazine is built on the premise of jump-starting writers’ imaginations. The publication provides the first line for writers and accepts fiction and non-fiction submissions for each issue based on that unique first line. Since 1999, readers have been able to enjoy a wealth of creativity that stems from these common start points. Recently, the first line held a contest for – First Lines! They received over 1,000 entries and selected four to use as the first lines for 2016:

Spring: “Unfortunately, there is no mistake,” she said, closing the file. (Submitted by Julia Offen)
Summer: By the fifteenth month of the drought, the lake no longer held her secrets. (Submitted by Julie Thi Underhill)
Fall: Mrs. Morrison was too busy to die. (Submitted by Victoria Phelps)
Winter: In the six years I spent tracking David Addley, it never occurred to me that he didn’t exist. (Submitted by Aysha Akhtar)

“But wait,” says Editor David LaBounty, “there’s more. We felt several sentences that were submitted as first lines would have made great last lines, and since we needed a last line for the third issue of The Last Line, we decided to pick one more sentence. We chose the following to be the last line for the 2016 issue.”

Issue 3 of The Last Line: It was hard to accept that from now on everyone would look at her differently. (Submitted by Adele Gammon)

In case you weren’t sure, The Last Line annual lit mag is the same concept, only flipped: writers are provided with the last line as their prompt.

No excuses writers: you’ve been prompted!