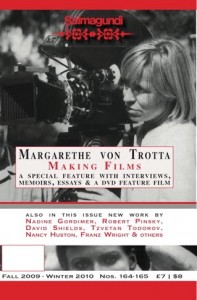 Always worth the cover/subscription price, so an absolute steal this issue, Salmagundi magazine Fall 2009-Winter 2010 is a special issue devoted to the great German film-maker Margarethe von Trotta, whose film Marianne and Juliane won the Venice Film Festival Award for Best Film and Best Director and whose other films – Rosenstrasse, Sheer Madness, Sisters, Rosa Luxemburg among them – have received numerous international awards. One of von Trotta’s latest feature films, The Other Woman, starring Barbara Sukowa, which has never been released in the United States, will be available as a DVD, sealed inside the special issue of Salmagundi.