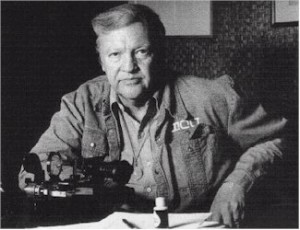 The newest issue of Five Points contains a special feature dedicated to writer James Dickey. Darren Wang contributes an interview with him, conducted in November 1996, just two months before he passed. In an introduction to the interview, Wang writes, “Even now, listening to the tape makes me cringe. A man of his stature would have been justified in sending me packing, and that’s where the generosity really showed. Time and time again, he latched on to anything in my questions which would allow him to ignore my ignorance.” The interview discusses writing of the South and the writers that had come before him.

Following the interview are reflections on James Dickey by Christopher Dickey, Ward Briggs, and Ernest Suarez. These reflections also carry photographs of Dickey at different stages of his life.

The table of contents announces that Kevin Cantwell is the winner of the Five Points James Dickey Prize for Poetry, and Cantwell contributes 3 poems to the issue.