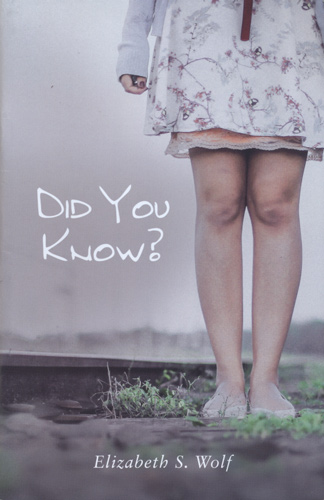 Subscribers to Rattle received a bonus with their Summer 2019 issue: Rattle Chapbook Prize winner Did You Know? by Elizabeth S. Wolf.

When her mother was diagnosed with multiple sclerosis in the 60s, Wolf’s father conspired with doctors, friends, and family to conceal the truth from her, a secret he ends up taking to the grave, a family member the one to finally break the silence. Wolf’s poems are about this time in her family’s lives, the title drawing from the conversation in which Wolf finds out about her mother’s illness:

Following the revelation about her health, Wolf’s mother challenges the life she created behind the shield of her husband’s secrecy; Wolf the voice in her ear urging her to finally do whatever she wants.

Wolf writes in a straightforward voice, never losing readers in overly flowery language, instead focusing on clearly relating her mother’s story, giving her a voice when she was denied one by her husband for so long.

Reading Did You Know? is an intimate peek into an archaic practice—a husband able to dictate his wife’s medical care while hiding it from her—but as women are currently fighting for bodily autonomy while access to abortion is challenged, the chapbook ends up feeling incredibly current.