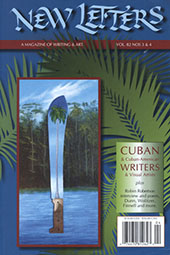 “Humans don’t wait for revolution or democracy in order to live their lives,” says Mia Leonin…Her point underscores both the force of literature and art, and the hope found there. The impulses to generalize about certain groups, to categorize and perhaps condemn–to indulge in the quality of discourse imposed on us by many critics and politicians–find their antidote in literature. “The poems, stories, and essays in these pages,” Leonin continues, “remind us that Cuba is not an idea or ideology, a photo op or a news line. Likewise, its diaspora is neither offshoot nor derivative. Whatever its temporality, literature is the present moment unfolding, and these writers carve out each moment with authenticity and vision.”