Founded in 2004 Arielle Greenberg, Tony Trigilio, and David Trinidad, Court Green has announced its newest issue, 12, will be the last. 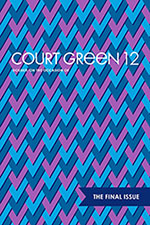 The magazine was named after Court Green, the property in Devon, England, where Sylvia Plath lived and where she wrote her most famous poems, the Ariel poems. The editors say, “We wanted Court Green the magazine to be like Court Green the property in England: a space open and vulnerable to the world, sometimes restlessly so, and a space for intellectual, emotional, and linguistic experimentation.” And so it has, for over a decade. For its final issue, the editors have “decided that the best elegy for the magazine might be to break Court Green’s long-standing rule that the magazine never publish the work of its faculty editors. To celebrate the 12 years of imaginative energy that the editors brought to the magazine, we decided to create a space for the editors’ poems. On the occasion, then, of Court Green‘s final issue, we present a selection of recent work by all of our current and past editors.”

Work by Past and Present Editors: CM Burroughs, Two Untitled Poems; Lisa Fishman, “July-August, 2013”; Arielle Greenberg, “A Little Bit Lonely. (Money.)”; Tony Trigilio, “from Book 2. The Complete Dark Shadows (of my childhood)”; David Trinidad, “Anaïs.” Each of these can be read full-text on on Court Green’s website here.