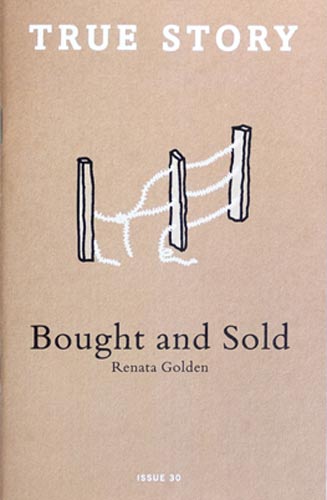 In “Bought and Sold,” Issue 30 of True Story, author Renata Golden locates herself in the complicated history of the American West after inheriting two half-acre ranchettes outside of Deming, New Mexico.

Purchased in 1969 by her father, a man ready to leave the ordeals of the Chicago Police Force behind him, the land promised a “welcoming warmth.” Fifteen years after his death, Golden steps on ground that had been handed down to her as the American narrative of land leading to wealth and a better life. Instead, the barren landscape and hard crusted earth force her to confront “how primitive land could be.”

Though her father believed the winds of the West “carried a hint of hope instead of despair,” as Golden mines the history of her inheritance, she discovers the injustice, violence, and death inflicted on the natives and land grant owners who first called the land home.

Despite framing each scene of the essay with excerpts from historical documents, Golden writes, “I know that some voices have been lost to the winds that carry a palpable sense of grief. I do not know the truths of the past. I know only the stories told around campfires and corrals, in letters and ledger books, that have survived. Stories repeated became history.”