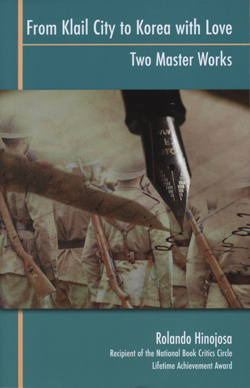 At the end of April, Arte Publico Press released a two-volume collection from Rolando Hinojosa. From Klail City to Korea with Love contains Rites and Witnesses and Korean Love Songs from the Klail City Death Trip Series.

In Rites and Witnesses, the author “captures the complex relationships and unsettling power struggles in both civilian and military life.”

Korean Love Songs has long been out of print, first published in 1978. In this section, Hinojosa presents his only poetry book, capturing the horror of war through Klail City native Corporal Rafe Buenrostro’s recollections.

Rolando Hinojosa is the recipient of numerous awards, including the National Book Critics Circle Ivan Sandrof Lifetime Achievement Award, and the Casa de las Américas prize in 1976, the most prestigious prize in Latin America. Now readers can bring home two of his books in one collection, continuing the examination of life along the border.

Learn more about From Klail City to Korea with Love at the publisher’s website.