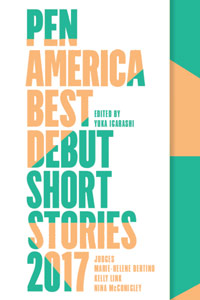 The PEN/Robert J. Dau Short Story Prize for Emerging Writers recognizes 12 emerging fiction writers for their debut story published online or in a literary magazine during the calendar year. The twelve winners each receive $2000 and are to be compilated in the inaugural anthology published by Catapult in August 2017.

This year’s winners were chosen by judges Kelly Link, Marie-Helene Bertino, and Nina McConigley, and together “they act as a compass for contemporary literature; they tell us where we’re going.” Each piece is introduced by the editor who originally published the story, providing editorial insight to aspiring writers and curious readers.

Learn more about the prize, the judges, the honorees, and the journals at the PEN America website, and pre-order your copy from the Catapult website.