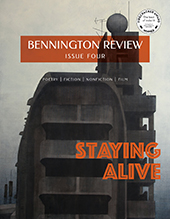 I was relieved to see it wasn’t just me who heard the Bee Gees in my head when I saw the cover of Bennington Review Issue Four themed “Staying Alive.” Editor Michael Dumanis opens the “Note from the Editor” with these two lines from the 1977’s classic, “Life goin’ nowhere, somebody help me / Somebody help me, yeah, I’m stayin’ alive.”

Dumanis explains, “As we were reading the poems, stories, and essays submitted to Bennington Review  in 2017 for this, our fourth issue, we noticed a word that come up with remarkable regularity – the verb ‘survive’ in all its various permutations. In Issue Four, it occurs – frequently as a directive, occasionally as the noun ‘survivor’ – twenty-eight times. The word ‘living’ can be found twenty-one times, an the word ‘alive’ shows up an additional twelve.”

A “tonal shift” from their previous issue, themed “Threat,” Dumanis notes that “something has shifted in the cultural landscape. An acceptance of threat has bred a series of reactions – resistance, perseverance, even a measure of optimism . . . there’s now a restored sense of agency.”

Stayin’ alive? I’m all for it.