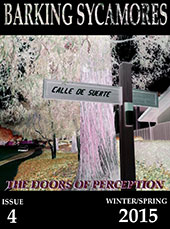 Barking Sycamores is an online publication of poetry, artwork, and short fiction (beginning with Issue 3) by emerging and established neurodivergent writers (autistic, ADHD, bipolar, synesthesia, etc.) as well as essays on neurodiversity and literature. The magazines publishing cycle has a start date, and then publishes one piece every Tuesday, Thursday, and Saturday until the issue is complete.

For this most recent issue (#4), editors asked for submissions on the theme of “perceptions.” Editors N.I. Nicholson and V. Solomon Maday say they received and “amazing outpouring” of “poetry, artwork, and short fiction which interpreted our chosen theme as broadly or as narrowly as desired,” making the selection process quite challenging.

The inspiration for “perceptions,” the editors write, comes partly from William Blake’s well-known quote from “The Marriage of Heaven and Hell”: “If the doors of perception were cleansed every thing would appear to man as it is, Infinite.” Also named as inspirations are Aldous Huxley and Jim Morrison, along with the other members of The Doors. The editors give their own perception on perceptions: “We considered the idea that humans are called to challenge their perceptions of life and sometimes reality itself. Psychological factors, our own opinions, prejudices, and mental filters can alter and severely cloud the way we see reality around us. It is up to each one of us to choose for ourselves how we see reality — and through what lenses.”