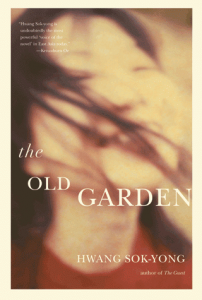 John Thorton writes: Seven Stories Press is serializing the first 62 pages of the English translation of Hwang Sok-yong’s The Old Garden, his 2000 novel and winner of the Danjae Award and Yi Literary Award in South Korea.

The novel’s central character is political prisoner Oh Hyun Woo, who is released after eighteen years to find that his world has completely changed and that the woman he loved has died. He returns to the house they shared briefly while both were involved in the radical resistance movement to South Korea’s military rule and there discovers her notebooks, through which he relives his life through her eyes.

The book received a strongly negative review by B.H. Myers in the New York Times Book Review, and the publisher hopes that by offering a substantial portion of the novel online for free, readers will be able to make up their own minds about this central work from the author Kenzaburo Oe called “undoubtedly the most powerful voice of the novel in East Asia.”