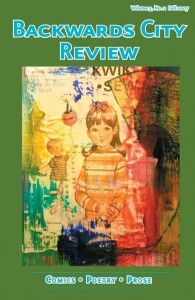 It seems a bit odd, but shortly after posting an “Original Editor’s Farewell” on the site, which spoke of the new blood taking over teh publicaiton, this was posted on the Backwards City Review Blog, Thursday, March 20, 2008:

“And With That…
And with that, I have some sad news. Backwards City Review is suspending operation as of its 7th issue, which is now back from the printer and being mailed out shortly. There’ll be more details forthcoming, but for now let me say, on behalf of all the editors, past, past, and future, it’s been a lot of fun, and thanks.”

I dropped BCR an e-mail to ask if this was permanent or not, as so often there is “hiatus” status while publications re-organize themselves, but I have not heard back from them. Sadly, in that founding editor’s farewell was the following comment:

“Yes, the founders of the BCR are stepping down. Our city is ripe for regime change. Citizens with pitchforks. Rhythmic chants. But we have not thrown the baby out with the bathwater. This little toddler will continue, there’s a new mayor in town, and remember, it takes a village. Another squad of hungry editors, right at this very moment, is waiting to get their hands on the next batch of oddities that you so crave. The magazine is in excellent hands. Our neighborhood, our city, our backwards nation is strong. It will prosper, thrive, probably get better, as hard as that is to imagine. And if it doesn’t, we’ll bash the kneecaps of each of those youngbloods.”

I don’t think I want to know if any knees were bashed, but I would hope there is some truth to the strength that can prosper and thrive, and that we might not yet have seen the last of BCR. If not, then perhaps the message is one much more prophetically overarching – as one lit mag fades away, I sit here with three inaugural issues of the new lit mag ventures, the next generation of hope and high energy. It is the way of our world.