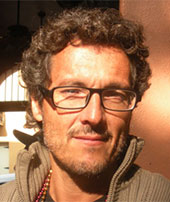 The Spring/Summer 2015 of Atlanta Review International Section, edited by Alex Cigale [pictured], features 52 Russian poets in translation. In his opening remarks, Editor and Publisher Dan Veach writes about the great Russian poets: Akhmatova, Mandelstam, Yevtushenko, and Brodsky – who was exiled as a ‘social parasite.’

Veach comments, “On their worst days, poets sometimes wonder if what they do is useless . . . what these poets do is far from useless, and it was out of fear, not scorn, that Brodsky was expelled from the Soviet Union. As Oslip Mandelstam, who died in Stalin’s prison camps, once said: ‘Only in Russia is poetry respected; it gets people killed. Is there another place where poetry is so common a motive for murder?’ Independent thinking, a broad and human perspective, imagination, fearless criticism, creativity itself – these are the things that repressive regimes fear most, and for which we turn to poetry and poets.”