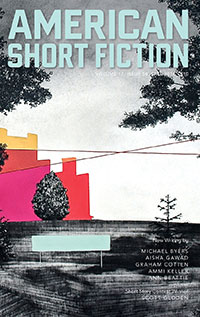 Gloden’s story is about a man who works in a post office and his brother who is soldier in Pakistan. Contest judge Amy Hempel praised the story for its new territory, commenting, “the ending is unnerving, very unsettling, and continues the story in a reader’s imagination.”

An excerpt: “My brother tells me that the bombs don’t look like they did on television when we were young: they’re not bowling balls with wick spouts that fire out like a sparkler. Instead, they’re clock radios; they’re wads of Silly Putty with electromagnetic current running through sparse wires; they’re ramshackle, he even said—so much so, a bomb looks more like something you store in the garage, which you don’t need every day but keep around in case of emergencies.”

Winners of the American Short Fiction prize receive $1000 and publication.