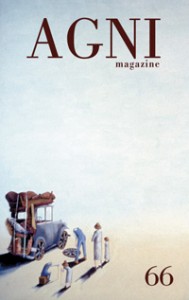 The latest issue of Agni includes a unique bonus feature: A CD to accompany Harrison Solow’s essay “Bendithion.” This CD, AGNI‘s first, marks the American recording debut of Welsh tenor Timothy Evans. The essay is as much about Wales as it is about Timothy, as it is about song and emotion and performance and solitude. I’ll say no more – you need to read the essay and listen to the CD yourself. (And, yes, I cried.)

“My name is Harrison Solow. I come from Los Angeles and I’ve never seen, met, known, or heard anyone in the world like Timothy Evans. And unless you live here, in this remote and somewhat implausible Welsh village where Timothy and I live, then neither have you.

“Timothy is our postmaster. He sells stamps, issues various baffling permits, collects payments for bizarre things like television licences and road tax and many nanny-like little punishments which the British government delights in inflicting upon its citizens. (By the way, never mistake ‘Welsh’ for ‘English.’ It’s far worse than mistaking a Canadian for an American, and in my opinion – having lived for some years in Canada – with good cause.) Timothy makes tea for his employees in the back room every morning, wears what appears to be the same sweater every day, and goes home to an empty house every night.

“He goes home, as well, to acres of soft emerald fields full of the Shetland ponies, Torwen sheep, and Bantam hens that he breeds and cares for single-handedly every morning, some noons (during lambing), and every night of his spectacularly mysterious life.

“He also has a voice that comes pretty close to what ‘Let there be Light’ would have sounded like had it burst forth from the lungs of an anthropomorphic god in the act of creation. And pretty close to Light itself.

“Let me say at the outset that this is not an objective account. I am absolutely committed to celebrating this man’s voice. It is flawless, haunting, and irrefutably magical. You won’t be the same after you’ve heard it. No one else is. And you will have probably wept through every unblemished note. Everyone else does. Of course, right now, ‘everyone’ doesn’t constitute a lot of people. This voice is one of the best (and deliberately) kept secrets in the world, as is so much about Wales. But that’s about to change. I’m about to do a little ‘let there be light’ in America, myself.”

The five-track CD and the rest of this essay are available in Agni 66.