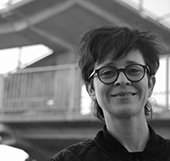 Katie M. Flynn’s “Island Rule” is the winner of the 2017 Nelligan Prize for Short Fiction selected by Richard Bausch. Her work appears in the Fall/Winter 2017 issue of Colorado Review.

In her Editor’s Note, Stephanie G’Schwind writes, “Every fall, we have the true pleasure of publishing the winning story of the Nelligan Prize for Short Fiction. This year, it’s Katie M. Flynn’s ‘Island Rule,’ in which an environmental biology professor is haunted by memories of the surreally accelerated evolution and ensuing political violence that expelled her, as a child, from her island home. Final judge Richard Bausch calls it ‘a very strange, audaciously original and convincing story that arrives at metaphor; it partakes of Kafka, being so matter-of-factly realistic .’ It’s a wonderful, daring story, richly deserving of the prize.”