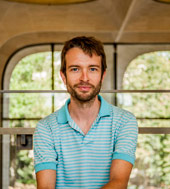 Readers may recognize James Crews’s work which has appeared in Ploughshares, Raleigh Review, Crab Orchard Review and The New Republic, among other journals. No stranger to writing award-winning books, his first poetry collection The Book of What Stays won the 2010 Prairie Schooner Book Prize and received a Foreword Magazine Books of the Year Award. Telling My Father will be published by Southeast Missouri State Press.