Books and Toasters: Who Ya Gonna Trust?

“What reader, what librarian, would concede a speck of credibility to a review service whose reviews have been paid for by the publishers and authors whose products are being reviewed?” 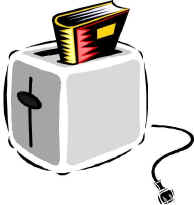 Would you buy a toaster because of a glowing review of the appliance paid for by the toaster’s maker? Not very damned likely, eh? Me, either. Be warned: There’s a parallel plan afoot in the book reviewing world, and one wonders whether the plain good sense that most breakfast fans exhibit in buying a new toaster will hold in readers’ book buying plans under this scheme.

You may have heard of the reviews-for-hire plan hatched by ForeWord Magazineof Traverse City, Michigan. Through its new review service arrangement with OverDrive, Inc., ForeWord will charge $295 to publish a book review in its online spinoff, ForeWordreviews.com. Reviewers themselves will receive $50 for a 400-word review.

The ForeWord plan is a hair-raising departure from traditional book reviewing. What reader, what librarian, would concede a speck of credibility to a review service whose reviews have been paid for by the publishers and authors whose products are being reviewed? Speaking of breakfast, would anyone trust aConsumer Reports article on toasters if GE, Proctor-Silex, Norelco, and other toaster manufacturers paid the magazine to evaluate their appliances? If that’s what it came to, I’d toast my muffins on a fork over a stove burner rather than buying a toaster “reviewed” for its manufacturer’s fee.

I would also rather read the back of a cereal box than spend money for a book based on a “review” for which its publisher paid the review medium.

The most dedicated readers of book reviews on the planet are probably librarians. To be good stewards of their often constricted acquisitions budgets, librarians must choose carefully when they buy books. Individual librarians have their own favorite review sources, but some major sources are widely used and trusted. They include such magazines as Choice, for academic libraries, School Library Journal for school librarians, Booklist and Library Journal, Publishers Weekly, the New York Times Book Review, and several others for general book buying guidance.

Depending on the library and its collections, as well as the special interests of given librarians, many other more narrowly focused sources of reviews also come into play. One of my favorites is the Journal of American History, which includes in each issue an excellent, lengthy book review section. Back when theTwilight Zone magazine was publishing, I always looked forward, as an aficionado of fantasy and horror, to its reviews in that genre.

One common practice of all these review sources is that they do not charge publishers for reviews. Publishing reviews for hire would rapidly demolish any credibility a publication enjoyed as a source of honest, objective reviewing. The analogy is obvious but fitting: Charging publishers to review books is a form of prostitution. In this case, the John is the reader gulled into believing that the hired review is on a par of trustworthiness with those appearing in the kinds of sources I mentioned above.

Over a 15-year span, I wrote several hundred book reviews for the Sunday edition of a daily newspaper. The paper paid me for the reviews. The review editor would have gone into apoplexy if a publisher suggested to him that the paper take money to run reviews of its books–and that publisher would never have seen another of its books on the paper’s review page.

The paper didn’t pay me handsomely, but enough for some welcome pin money at the end of the month. The ForeWordreviews.com reviewer pay is better, even at a modest $50, than what most newspapers pay for reviews, yet what self-respecting reviewer will sign on to work in an environment that to any outside observer makes it appear that reviewers are taking money from the publishers whose books are under review?

The vested self interest of ForeWordreviews.com in producing positive reviews of the books at issue will be so inescapable that no one thinking critically would trust those reviews. Reviewers who appear to take publishers’ money to review books will surely find themselves objects of suspicion. Not only will their stature as honest book reviewers suffer; their trustworthiness as writers of anythingwill come into question.

Curiously (tellingly?), the ForeWord folks apparently do not plan to publish the hired reviews in their traditional review organ, ForeWord Magazine. In response to a question in the ForeWordreviews.com FAQ sheet, it sounds as though a firewall will stand between the purchased reviews and the reviews that appear in the magazine. As of Noon on May 21, the answer to the FAQ question was ambiguous enough that one could not specifically rule out the possibility of an online review turning up in the magazine, but that was the impression that emerged from between the lines.

The ambiguity of the response to a question that could have been answered with a simple “yes” or “no” may have been intentional, or it may have been the result of careless writing exacerbated by a reluctance to be candid. If the firewall exists, one must wonder why the ForeWord crew feels compelled to impose it.

In any case, publications worth consulting for their reviews do not take money for publishing them. That isn’t reviewing: It’s advertising. There’s a place for advertising, but it isn’t in the review columns, and readers should never fear that it might be lurking there in disguise.

The Lure of Easy Money

Back in my book reviewing days, I felt obliged to read the books I reviewed from start to finish. This was not always a pleasant task, but I did not think it fair to the writers, the publishers, or my readers to knock off a review based on a quick reading of a book’s first 50 pages and a skim through the conclusion. Some reviewers work this way. I couldn’t make myself do it. Sometimes that bogged me down in what seemed interminable reading; if the compensation I received for reviewing such books had been broken down to a per-hour basis, it would have been pathetic.

On the other hand, I tried to keep in mind the first reason I wrote reviews: to communicate ideas about books to a reading audience. The first reason was not to make money, and a good thing it wasn’t. Sometimes digging ditches would have been easier and more lucrative.The lure of easy money has a very strong appeal. It is easy to see how a reviewer working under a publisher-pay-for-review system could be tempted to produce numerous reviews based on shallow reading and puff writing tempered by an occasional “critical” comment, just enough negative seasoning to help maintain an illusion of objective distance. An experienced reviewer can write a credible-sounding 400-word review, either negative or positive, while sound asleep. There’s nothing to it, if the objective is to get the thing done fast–and out there on the street to pick up the loot.

As strongly as I urge reviewers to shun this lure, and encourage librarians to disdain reviews-for-hire, I question publishers willing to sink their promotion budgets into the pay-for-review regime. Yes, they’ll fool some of the people a lot of the time, but they’ll do it at the expense of their credibility, their integrity, and their public image among knowledgeable readers as upholders of certain valuable traditions in publishing. No publishing tradition is more valuable, for all its flaws, than a reviewing system that allows readers to assume with reasonable confidence that the reviews they read do, indeed, come from the unbought, unbossed minds and hearts of the reviewers.

As short-story writer Dennis Loy Johnson observes in his May 21 column in his Web site MOBYlives (www.mobylives.com), it is quite likely “that ForeWord won’t get much business from the publishers it claims it means to serve.” More likely customers for this dubious service may well be self-published authors, many–probably most–of whom are naïve about how book reviewing works. The same poor souls who pay vanity presses to put out shoddy versions of their books will line up to pay to have their shoddy books reviewed by a source that few readers will trust.

It’s a cruel prospect, all right.

Maybe it doesn’t matter to the hired review folks that many readers will actively avoid books promoted through a hired-review regime. Maybe all that matters is how many people they can persuade to get serviced with such reviews.

And maybe that’s living in the U.S.A. Nevertheless, that doesn’t mean we have to take it lying down, pretending that we enjoy it and think it a good idea. As Winston Smith might have said, this is a doubleplusbad idea. It may make money, but it is hard to see how it could contribute anything worthwhile to writing, publishing, reviewing, book buying, or reading.

Now, if you’ll excuse him, Uncle Frank will go brown a piece of toast over the stove, and eat it while reading the back of his Cheerios box.