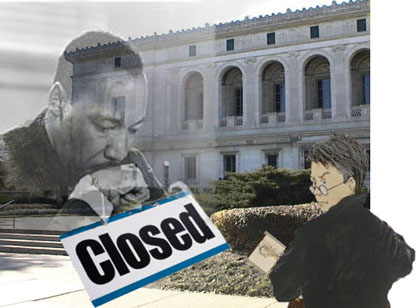 I meant to go to the library the other day, specifically, on Saturday, January 17, 2004.

I had a bunch of stuff to look up. Being an orderly librarian, I had my look-up stuff neatly noted and stacked in a pack of 4 X 6 index cards. Nobody had better accuse this librarian of having a 3 X 5 mentality! I’m beyond that—an inch in either direction—but with the payload still small enough to fit my inside coat pocket so I don’t have to lug around some clunky old briefcase, backpack, or cord-handled shopping bag with my junk in it, like the rest of those weary researchers.

My goal: The Detroit Public Library. I had to be in Detroit anyhow, that day, so it would be easy to slide by the DPL to score some books. On the 16th, I double-checked the library’s Website. Yup, no problem: In spite of tough budget times, the DPL maintains Saturday hours. Good for it. And good for it, too, for keeping in its fiction collection some books that are mighty hard to find elsewhere. Those are the ones I wanted. My gratitude ranneth over.

A Confusion of Dates

The 17th dawned (“gloomed” would be more accurate) with a howling wind, flying snow, and warnings on the radio about dangerous roads.

No problem. Uncle Frank eats dangerous roads for breakfast. But I had to double-check an item in the DPL catalog…. I fired up our faithful Chinese computer, and Netscaped to the DPL homepage.

And goggled (not Googled) in disbelief at the prominent message on the page: The DPL would be closed—that’s KLOSED, with a kapital K—on Jan. 17 for Martin Luther King, Jr.’s birthday.

Was somebody messin’ with Uncle Frank, or what? Jan 19 is the holiday (for government workers, if no one else). Jan 15 is MLK’s birthday. So why was the library closed on the 17th? Huh? Are you telling me, in sincere sincerity, that MLK would think it a good idea to close a library, any library, on any day, in his name? That he would want to deny people, of whatever hue, a day’s opportunity to pursue truth, justice, and the American Way in the nation’s libraries? Or even that he’d want to deny the poor wretches of the street—the winos, the headcases, the homeless and lost—a chance on a rotten winter’s day to warm their pitiful hides for an hour while nodding over a newspaper in the library reading room?

I hardly think it.

Yeah, well… Closing libraries–denying access to seekers of truth as a function of “celebrating” MLK’s legacy–is only one of the odd phenomena attached to his memory. Another rapidly burgeoning manifestation of curious celebration is the “a day on, not a day off” movement. In this well-meaning homage to King, organizations around the country encourage their members to put in a day, or a half-day, of volunteer work at some local social service agency. One might, for example, sort incoming clothes at a Salvation Army facility, or help prepare meals at a soup kitchen. Presumably this activity honors King and his principles.

How, precisely? Where in MLK’s work (I have searched, without finding) does he advocate helping perpetuate the status quo by volunteering to work in the organizations that help maintain it?

Organizations like the Salvation Army and soup kitchens and homeless shelters are indispensable crutches for the very social system whose abuses and injustices they seek to ameliorate. They are part and parcel of the problem; they do nothing to address the underlying causes that necessitate their existence.

Which is not to say that there is anything wrong with volunteering to work in such places. I’ve done it myself, spending Saturday mornings in a soup kitchen in a poor neighborhood in Flint, Michigan.

No, there’s nothing wrong with such work–but to engage in it thinking that one is somehow responding to MLK’s radical analysis of American life is errant. Such volunteer efforts work nothing but cosmetic relief. MLK’s philosophy, focusing on racial and economic justice, non-violence, anti-militarism and anti-imperialism, addresses fundamental American assumptions and behaviors, not secondary matters such as volunteering to sweep the shop floor after the daily American routine of capitalist greed, abuse of labor, exploitation of the poor, corporate welfare, and global arrogance has strewn the quotidian human wreckage across its surface.

Boiling It Down to Pap

America is gifted at boiling down great ideas to sentimental and non-threatening stuff. To pap for the masses, as one of my long-ago bosses liked to say. MLK’s radicalism, which challenged the nation to look into its soul and change its evil ways, has been diluted to a pallid shadow of its original substance. (And has also, such a surprise, been appropriated and warped by the political Right as an excuse not to pursue the very kinds of systemic cures that King advocated.) What can one expect? When MLK’s own family sells the rights to his image to corporate advertisers, why would we anticipate any other outcome?

If MLK were still with us, can anyone doubt what his positions would be on the invasion and occupation of Iraq, the systematic abuse of the nation’s poor, the contempt for human rights endemic in the Bush administration, or any number of other actions that spring from the nation’s fundamental assumptions about itself?

In his lifetime, the state saw MLK as its enemy. His hounding by the FBI as a “threat” to the country is common knowledge. But, to be sure, MLK was a threat. He threatened the business-as-usual attitude that makes American imperialism, and soup kitchens in Flint, Michigan, possible and necessary. If he were alive today, the state would still see him as its enemy, for the same reasons it did in 1968.

And good-hearted volunteer work, regardless of whatever temporary relief it affords those crushed by the system that King opposed, does nothing to change that system. It does not honor King’s memory by taking up his work; in an inescapably dreary sense, it capitulates before the forces of darkness that King sought to dispel.

In my sputtering dismay at finding the Detroit Public Library closed on the day I had planned to visit,  I sent an inquiry to the library’s e-mail reference address, suggesting that it might not be such an apropos idea to close the place to honor King’s memory. I received a polite reply informing me that the closing was the result of a labor agreement, part of an arrangement, apparently, to assure that everyone would get a day off for King’s birthday. The DPL main library would be open on the 19th, its branches closed.

Anyone can understand wanting a day off, not a day on. I think it could be better managed; a skeleton staff could probably keep just about any library open; those reporting for duty could take off a day of their choice at a later date. No? Probably not. That would be too complicated. It might even, oh, of course it would—prompt some people to claim that not closing the libraries on this occasion would show “disrespect” to King’s memory.

I’d like to see MLK’s reaction, if he could know that libraries are closing in his name, and that volunteer work is being passed off as an inspired response to his message.

I think he would say that some people have missed the point.

By a mile or two.